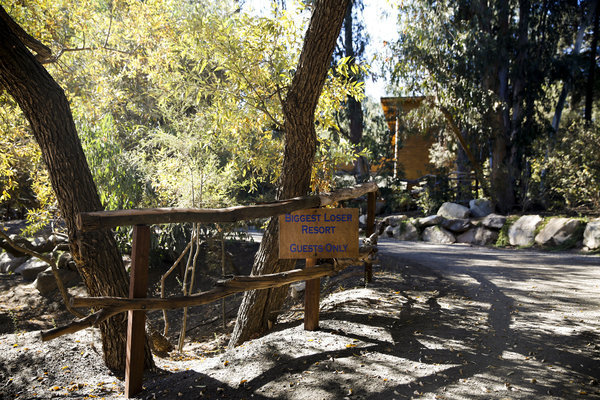 The contestants on “The Biggest Loser” are just that — players in a reality show game who are subjected to harsh workouts, screeching coaches and weigh-ins on national television. The role is not for everyone, not even for everyone desperate to lose weight.

There is, however, the possibility of an alternative performance; we’ll call it “Biggest Loser” lite. The setting? The hills above Malibu.

The Biggest Loser Resort is definitely a resort, with lots of wood and glass in the main building nestled among tall evergreens, a hot tub, delicious spa food served by waiters and other amenities. But it’s not too lite. Wake-up is at 6 a.m. for stretching, followed by breakfast, a mountain hike, workouts and classes until dinner at 6 p.m. Sessions are not considered optional.

Some people stay for weeks. Some are sent by their employers or nudged by a spouse or a child. It works as a “girlfriend retreat” without all the temptations of, say, Cabo, and it’s more rigorous than many spas.

Judy Opperman of Scottsdale, Ariz., spent a week at the resort in February and returned in November, thanks to a Groupon discount. “Here they push you, they get you outside your comfort zone.”

She was considering talking to her husband about stretching her stay to two weeks. “It’s one of the hardest things to do, to take the time for yourself,” she said.

Virginia Vierra, 64, of Fontana said that when her scale tipped 300 pounds, she determined that she would move from “waiting to die to ready to live.” She’s lost more than 20 pounds and given up the scooter she had been using to get around.

The information about nutrition, portion control and physical activity is hardly news to Ann Sura. She’s a physician in Lake Tahoe and talks about them all the time with her patients. “It’s so different to implement for myself,” Sura said.

“I did a ton of research, looking for something to rekindle my forgotten love of working out and healthy eating,” Sura said. “They hold you accountable. If you’re not in class, they go find out why.” Read More