Last Sunday I took out of the house and into the real world 11 months of experience honing sustainable eating, weight loss and exercise.

I did my first 35-mile bicycle race.
This was huge for me — a landmark in my 55 years.
I’ve raised two daughters, hiked a 700-mile section of the Appalachian Trail and been chased by a German shepherd, but I was unsure about my ability to ride 35 miles straight powered by my own muscles.
The most I’d ridden before was 22 miles on a rocky dirt trail through the Everglades.
The Everglades ride was a magnificent — we saw otters, a deer and raccoons — but hard on the body.
So I choked over a 35-mile road race. But I had a mentor — my friend Anita Watts from Englewood.
And I had 11 months of daily workouts in the Leanstay gym.
Anita told me about Sharkey’s Ride The Beaches April 27. She wanted to ride with me and I wasn’t about to turn down that offer.
Ride The Beaches is not a well-publicized race — it’s a quiet race — Anita said.
Anita has gone on bicycle tours all over the world – South Africa, the Dolomites, Chile.
At 67 she set out to hike the Appalachian Trail.
Who better to introduce me to the world of road bike racing? 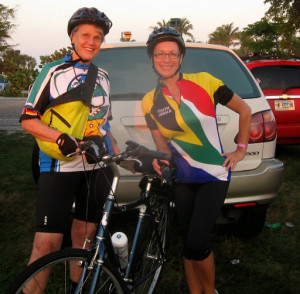 The 70-milers were taking off from Sharkey’s on the Pier in Venice, Fla. at 7:30 a.m. The 35-milers, at 8:30 a.m.
At 7:15 Anita, the voice of experience, said since we weren’t racing to win, we might as well leave and minimize sun exposure.
The route was mostly on shady roads and canopy roads — back roads and barrier islands from Venice to Englewood Beach — the next town south — and back.
Packs of 70-milers, 50-strong, soon passed us — members of bicycle clubs all dressed the same in matching shirts and riding $3000 bikes.
I was wearing Anita’s bike shirt that she brought from her bike tour in South Africa, sporting the mass of colors of the South African flag.
We were not racing. We stopped twice for photos on Blind Pass Beach where the road hugs the Gulf beach along the barrier island of Manasota Key.
The views make you want to ride forever.
When we got to the 17.5-mile halfway point at the roundabout in Englewood Beach, I knew I was going to make it.
Our halfway reward was a rest stop at Middle Beach where Sharkey’s epic Shark Bites energy bars, juice, peanut-butter-and-jelly sandwiches and rice crispie treats overflowed off platters just for us.
The cameraderie was great and for once I wasn’t worried about the calories.
Including stops, it took four hours to ride 35 miles.
We averaged 13.5 miles an hour, Anita said.
Sharkey’s gave us lunch on our return and the best beer I ever had.
So much for a “quiet” race — about 1,000 people rode.
I rinsed my sweaty post-race body off in the Gulf at Nokomis Beach in Venice and dozed in my beach chair at the water’s edge the rest of the afternoon.
Heaven!
If someone had told me when I started Leanstay in June 2013, 42 pounds overweight and with a bad attitude that less than a year later I’d be doing a 35-mile bike race, I wouldn’t have believed it.
I’m a believer.